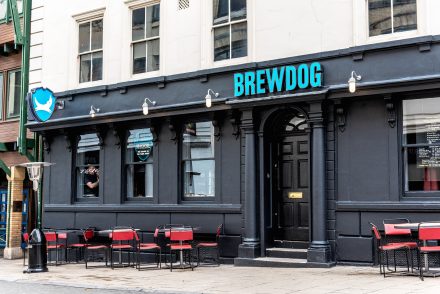 YEAR OF THE BEER: BREWDOG NORWICH LAUNCHES WITH 365-STRONG CRAFT BEER OFFERING: ONE FOR EVERY DAY OF THE YEAR

–  BrewDog Norwich launches to become the first place in the UK with a beer for every day of the year in
honour of Norwich being the first city to have a pub for every day of the year
– The bar will boast a bottle shop, 25 draft lines, 30 bottles in the bar, and rotating guest beers
– Opening on 15th April to the public, the bar is located on 1 Queen Street, NR2 4SG in a grade II listed
building

The fine city of Norwich in Norfolk is about to become host to the UK’s first bar where punters can get a beer for every day of the year, to go with its previous record of being the first city to boast 365 drinking holes. Irreverent craft brewery, BrewDog, is launching BrewDog Norwich all guns blazing with an unprecedented number of kickass craft brews for beer buffs to get stuck into.

The bar will throw open its doors to the public on 15th April, offering a world of different styles and strengths of beer in the bar, a fully stocked bottle shop, and bar food including must-try “hopped up” fries. There will be 25 draft lines, including guest taps from Oskar Blues, Mikkeller and Beavertown, and the brand new bottle range offering a huge selection of different guest beers (which will rotate every three months); a mix of BrewDog headliners Punk IPA, Dead Pony Club and Jet Black Heart, and new badass beers Born to Die and Barrel Aged Albino Squid Assassin, alongside beer from local microbreweries and international craft comrades, such as AleSmith, Almanac and Stone Brewing.

The craft brew of the day will be displayed inside the bar, offering the ultimate tick list for Norwich’s beer obsessives. Those taking up the gauntlet to sample all 365 can tweet their tasting notes to the bar using @BrewDogNorwich and the hashtag #BrewDogNorwich365.

BrewDog co-founder, James Watt said:
“Norwich has a brilliant heritage beer scene. This is a city passionate about beer, and that’s why we’re so excited to launch a bar there, and commit to offering a different craft beer for every single day of the year. It’s a veritable stronghold of the craft beer revolution, and we’ve had BrewDog fans hounding us to set up shop there for a while – we can’t wait to get involved!”

BrewDog Norwich will be located at 1 Queen Street NR2 4SG, in an incredible Grade II listed building. BrewDog has stripped back years of neglect to reveal original beams and brickwork, and kitted out the bar to hold 180 Hop Heads.

James Watt continued:
“This year has already been epic for BrewDog! We’re coming to the end of our fourth round of crowdfunding via Equity for Punks, with a massive £21m under our belts, and another few thousand shareholders shoring up the ranks of our punk army. We’re opening our first brewery in the US in Columbus, Ohio later this year, building a sour facility up at BrewDog HQ in Scotland, and even branching out into the world of spirits with the Lone Wolf Distillery coming online in the next few weeks. Craft is seeing a huge uprising, and we are absolutely psyched to be leading the charge on bringing down bland mass-produced rubbish!”

More information on BrewDog can be found at brewdog.com

The proposed England Coast Path – have your say