I recently received an email from Barry Meadows of the Friends of North Lodge Park relating to a proposal by North Norfolk District Council for a car park and new public toilets in the Park.

My observations are as follows:

When I was growing up in Cromer the Park consisted of two hard tennis courts (site of the proposed car park), a bandstand/stage that was used for entertainment of the public (particularly at Carnival time), a bowling green, public shelters, well-used putting greens and gardens with public seating. Due to general neglect by the local authority and a lack of investment, the Park has gradually been allowed to degenerate over the years. The tennis courts are long gone, the bowling green has now become a football playing space for local youths, the putting greens are not in use, the gardens are unkempt and hedges uncut. The NNDC blames this sorry state of affairs on a lack of financial resources. That is a matter for debate as money is often found for projects many local people would consider of lesser worth.

Thanks to the work of the Friends of North Lodge Park the area has been improved over the last couple of years. The reopening of the cafe staffed by volunteers has been a great success and has brought the Park back to life again; however, as an asset for visitors to the town and the local people the Park is still lacking in some respects. In particular, there is no playground for children, the absence of which in a public park is somewhat odd. The site of the proposed car park would seem to be an obvious location for such a play area.

Cromer has over many years suffered from poor planning. There are obvious examples of this in some of the more “modern” buildings and the chaotic state of the traffic management in and through the town.

What are the main factors rendering this proposal a very bad idea?

The one good thing about this proposal is the construction of a new toilet block for the public on the site of the old stage building. The condition of the current toilets is poor and this improvement is overdue.

Many local authorities are struggling to balance the books these days and are cash hungry. This proposal is for a car park to generate revenue and with so few spaces the cost can hardly be justified. If it goes ahead another part of a public space that has been enjoyed for years by locals and visitors will be lost.

Mr Meadows sets out a strong case to oppose the plan in his mail below. If you agree with him please make your feelings known to the NNDC. 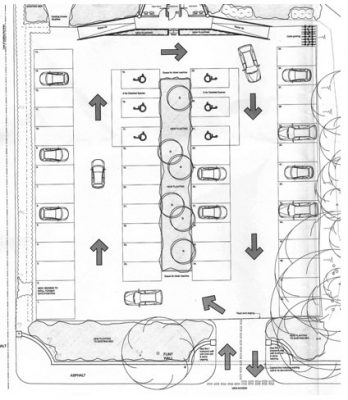 North Norfolk District Council have submitted plans for a car park in North Lodge Park, with conversion of the old bandstand to public toilets.

In summary the proposals are:

There are a number of points to be addressed to improve these proposals, such as

Putting the proposals in context

How would it benefit our Park?

The old children’s play area (sometimes known as ‘the concrete area’), where the car park is proposed is not a brownfield site: it is a core part of the recreational space in the Park.  The area has been left to deteriorate for a number of years, used for a waste transfer facility and more latterly a builders’ yard, but previous to that it has always been an area of recreation.  Key questions to answer are; “Is a car park the best use of this part of the Park considering the Park as a whole and how would it benefit our Park?”

On paper the current proposals seem to be counter to many of the council’s core policies (see footnote).   These policies can be summarised to say that any development of an open space must improve that space.  It could be argued that the car park is an improvement to the current state of the old children’s play area.  But that’s a bit like saying putting a new uPVC front door on a dilapidated Listed house is an improvement while the rest of the house falls down.  The car park is like the new front door while the rest of the Park continues to deteriorate.

NNDC policies support our strong belief, that the Park needs to be seen as a whole.  NNDC are developing plans to work with a strategic partner for the long term sustainability of the Park (with a Prior Information Notice, PIN, providing information and seeking ‘bids’ from anyone interested in ‘managing’ North Lodge Park). We would like clarity on how NNDC see this project in the context of those plans for the proposed management of North Lodge Park.  The income generated by a car park would fund the Park and take away future costs and liabilities from NNDC.

It could be argued, particularly by the 50% of respondents to our latest survey who said that you could accept – with caveats – a car park in North Lodge Park,  that if a car park is inevitable then this proposal is about as good as we’ll get from NNDC.   However, apart from providing parking for the Park, thereby increasing accessibility and footfall, these proposals take from the Park rather than give.  These are proposals for part of the Park without the context, costs and benefits of plans for the Park as a whole.

This is a big decision for Cromer, and we need more information to make it an informed decision.  We have written to NNDC requesting the fuller picture and will keep you informed..

Do let us know what you think.  More importantly let NNDC know!

Footnote: NNDC policies that the car park proposals seem to be counter to.