Cromer is a Norfolk seaside resort that is extremely busy during the summer months; tourists love this very attractive part of the North Norfolk coast.  The town, and the exceptionally fine pier and  promenade, have recently benefited from some major improvements, financed with money mainly from the EU.  This was not before time as the resort had begun to look a bit shabby in places.

The combination of  Cromer’s invigorating air, sandy bathing beaches and cliff scenery has attracted holidaymakers since the 1870s.  Cromer is also quite unusual in that the town faces to the north while being on the east coast of England. This aspect means that the sun appears to rise from, and to set into the sea.

Accommodation is available in the hotels; Cromer B & Bs, Cromer holiday cottages, camping and caravan sites.  There are numerous places to eat in the town but be warned that Cromer is not a destination for gourmets.  All I can say is that good plain food is available but do not expect more than that – no Michelin stars here I am sorry to say.

At the end of the pier is the RNLI lifeboat station that is open to the public.  The pier theatre stages a traditional summer show and Sunday concerts that often attract full houses.

The shopping centre is pleasant and is dominated by the church that stands at its centre.

There are numerous entertainment opportunities of all kinds in and around Cromer.

The walking in this part of Norfolk is superb.  The Lighthouse Hills to the east of the town are a delight.  A very popular walk is from Cromer along the cliffs to Overstrand where refreshment can be enjoyed at the Cliff Top Cafe.

Apart from tourism, fishing for the famous Cromer crabs (the sweetest crab meat of any to be found in UK waters) is the main industry.  The activities of the fishing boats as they launch and return with their catches is a great tourist attraction.  Cromer’s fishermen must be the most photographed and filmed in the entire country.

Cromer benefits from its topography

The very attractive and sheltered location of the town was formed by the retreat of the Great Scandinavian Glacier during the last Ice Age; the massive forces created the high ground to the south, east and west.  The escarpment and surrounding land would have been dense forest when the area was first populated.

This idyllic spot was ideal for human settlement as it provided an abundant source of food from the surrounding forest and the North Sea. Archaeological finds in the cliffs indicate that the area was populated at least as far back as the Stone Age.

The medieval fishing village that eventually became Cromer, was known as Shipden; this settlement disappeared under the waves after a violent storm and flood sometime during the reign of Henry IV.

The Victorians and the Edwardians saw the height of  Cromer’s fame as a somewhat exclusive resort. This interest was originally sparked by articles in the Telegraph written by a journalist called Clement Scott in the 1890s. He went on to write a book titled Poppy-Land that described the Cromer and Overstrand area in a romantic fashion that greatly appealed to the Victorians.  It sold thousands of copies and attracted members of high society, including royalty, literary figures and famous artists, to visit.  This new tourist trade prompted the building of luxurious hotels, some of which still remain today.  As soon as the railway reached Cromer in 1877 the resort’s excellent sandy beaches and balmy sea breezes started to attract holidaymakers in growing numbers.

The First World War changed many things, one of which was Cromer’s appeal as a holiday destination of the rich and famous.  The trade fell away and the situation was made worse by the 60s package holiday boom when British holidaymakers started to make for sunnier climes.

Norfolk benefits from being the county in England with the lowest amount of yearly rainfall; a bonus for the tourist trade.

What the holidaymakers do not experience is the extreme weather that Cromer sometimes endures during the winter months. There is no land mass between this part of the Norfolk coast and the Arctic, and the unobstructed cruel north winds sometimes sweep down onto the town, hurling the North Sea against Cromer’s substantial sea walls. 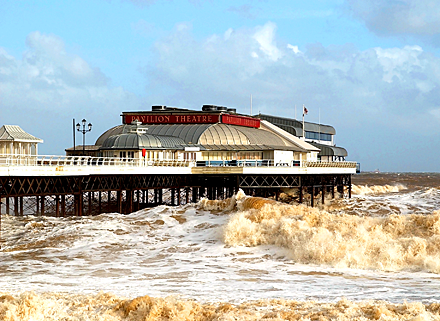 Happisburgh – losing its battle with the North Sea

Cart Gap to Horsey on the forgotten coast