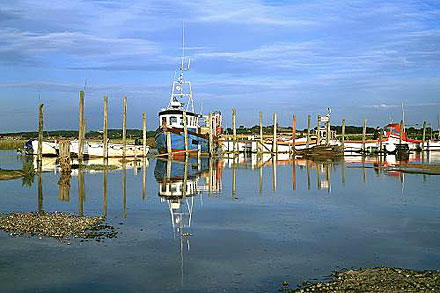 If you are a seafood fan you will know the exceptional quality of the mussels harvested in the clean waters to the landward side of Blakeney Point in North Norfolk. I have eaten mussels in many different parts of the country but have never found any that taste as good or are as plump as those from our local waters.

Unfortunately, this season a major problem has arisen and the mussels are not available. The fishermen have had to abandon the mussel beds that are too silted up to work.

The chairman of the Fisheries Local Action Group (FLAG), John Lee stated: “The problem is there is now so much sand been washed in there, it’s totally covered the beds.”

“We’ve worked with the Marine Management Organisation, the government body Cefas (Centre for Environment, Fisheries and Aquaculture Science), Natural England, all of whom we’ve tried to get to do surveys to find out where the silt is coming from. Unfortunately, like everybody else, they are a little bit strapped for money so not too much can be spent on it.”

Some of the stock has actually been washed away and it has been impossible to plant the seed mussels. One of the fishermen, Mr Randell, said that the problem started about three years ago when the sand deposits started to build up. The mussel beds cover an area of approximately 20 acres.

A spokesman for Natural England said: “We share local fishermen’s concern about the decline of mussels at Morston. At this stage we can’t be sure of the cause of the siltation which is contributing to the decline, but Natural England would be happy to play an active part, working with these other parties, to find a solution.”

The chef at the Michelin Star restaurant at Morston Hall, Galton Blackiston commented: “It’s literally outside the gate, so to be deprived of them at this time of the year is a disaster.

This will also have a real impact on the local economy. The mussel fishermen will have to find other work and the income from the sale of tons of mussels to restaurants and fishmongers has been lost.

What could be the cause of the problem? That is yet to be established, however, some major work was carried out at the eastern end of Blakeney Pit a few years ago when the Glaven was re-routed. Could that have something to do with it? This is a sensitive system and if you do something in one place it can easily cause an unanticipated  change nearby. Also,  knowing the locals as I do, I expect some suspicious eyes will have already been cast  in the direction of the Sheringham Shoal wind farm where the 88 135m high turbines on their 35km2 site slowly turn to produce electricity that we once used to cook our Morston mussels.

New Exhibition at the Sainsbury Centre UEA in Norwich