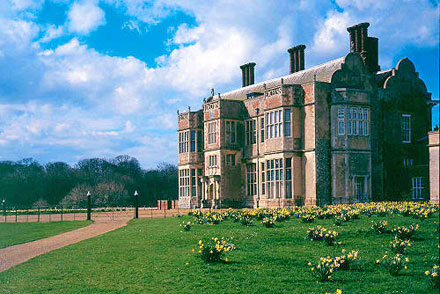 I have received this press release from the National Trust.

Intriguing tales from the past revealed through contemporary art, as new exhibition opens at Felbrigg Hall

“Contemporary artworks by a sculptor, a woodcarver and a film maker are set to bring the stories of an intriguing historic house in Norfolk to life with a new exhibition opening at the National Trust’s Felbrigg Hall.

Felbrigg Hall, home of Robert Wyndham Ketton-Cremer, who devoted his life to preserving Felbrigg, has had a colourful past. As part of the National Trust’s Trust New Art Programme, and in partnership with the Norfolk Contemporary Art Society (NCAS), 250 artists applied for the opportunity to undertake a residency that would give them special behind the scenes access to the house and its archives to create new perspectives on its history through contemporary art.

Florence Kennard, Alec Stevens and Alida Sayer were the artists chosen for their creative ideas and experience. After months of immersing themselves in the stories of Felbrigg, their work will go on show from April 22 in an exhibition called ‘The Makers’.

Eleanor Akinlade, the National Trust’s General Manager at Felbrigg Hall said: “In the past, the families who lived at Felbrigg had a tradition of commissioning new work from artists and craftspeople. The artworks created for ‘The Makers’ exhibition, which will be displayed throughout the house, continues this tradition and gives visitors the chance to see Felbrigg in a new light. Each artist has produced something very different.”

Florence Kennard is a film maker who became intrigued by the passing of time and with the rhythms of the house. With access to the difficult-to-reach clock tower as well as other clocks in the house, Florence focussed on their workings, sounds and mechanisms. She was also inspired by the process of preparing the house each winter for its spring opening and has entitled her film, Rebirth.

Alec Stevens is a skilled wood carver, with an interest in exploring the more quirky elements of an historical story. Alec’s installation features hand-carved fireworks with witty names that were inspired by the life and passion of William Windham II, a keen firework maker. It was the unintentional detonation of fireworks stored in Windham’s firework-making shop at the property that destroyed part of Felbrigg’s servant’s wing in 1755. [1]

Sculptor Alida Sayer immersed herself in Felbrigg’s library and archives and as a result her work has a sense of the poetry and multi-layered stories that she discovered during her research. The title of her work, the Balcony Hotel, refers to the Ketton sisters who moved to Felbrigg in 1863 and spent much of their time in the attic rooms. The green colour of one of her sculptures refers to the arsenic which was an ingredient in wallpaper at the time which may have led to the early death of two of the sisters. [2]

The project has been curated by Dr Caroline Fisher, a trustee of NCAS and Curator of East Gallery, Norwich University of the Arts. Caroline said:

“‘The Makers’ follows on from ‘The Tourists’, a successful project initiated by Norfolk Contemporary Art Society and the National Trust at Felbrigg in 2014. So we were keen to build on this project, but to include an artists’ residency element so that the artists could spend time at Felbrigg, immersing themselves in the atmosphere and history of the estate.

“The three artists each approached the project from their own angle, but with an enquiring mind and huge enthusiasm and the resulting work brings to light often overlooked elements of the property that are intriguing, poetic and engaging.”

Grace Davies, the National Trust’s Contemporary Art Programme Manager says: ‘The Makers’ is building on a successful contemporary art programme we have been offering at Trust places for over five years, which gives audiences new ways to experience and understand the houses and landscapes in our care through the imaginative eyes of today’s artists. The artists at Felbrigg are unlocking the rich layers of its history spanning several centuries to reveal its stories and collections in new ways, while continuing the long legacy of creative commissioning upon which Felbrigg was built.”

The project has been made possible with the additional support from Arts Council England, East Anglia Art Fund, Norfolk County Council and Norwich University of the Arts.”

‘The Makers’ Exhibition at Felbrigg Hall will run from 22 April to 29 October 2017.
For further information and opening times visit www.nationaltrust.org.uk/felbrigg.