A few years ago a young man that was born and bred in Wells-next-the-Sea staged a protest.  He set up camp on The Buttlands at Wells and erected banners, bemoaning the fact that due to rocketing house prices he could not afford to buy or rent property in his home town. 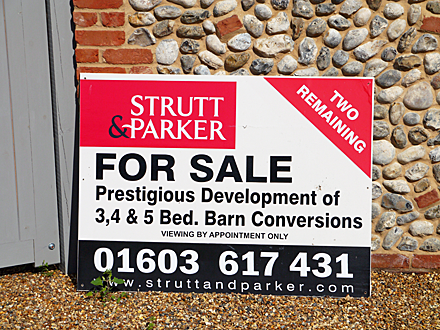 This problem is not peculiar to Norfolk of course.  Several areas of the UK – notably the south-west, southern England and the Yorkshire Dales and Coast, find their local young people facing the same problem.  All that the local authorities seem able or willing to do (with a few exceptions) is to insist on the inclusion of some so called “social housing” units on new developments. This has had mixed results, with some developments being inappropriate due to their location. The provision of cheaper lower-specification homes is also not popular with developers working in desirable areas of the North Norfolk coast. Naturally enough they want to maximise their profits by building attractive high-value properties that will attract buyers from outside the area. It can also be argued that many of the prime coastal locations are not really suitable for young families to live in. The closure of village schools and other local amenities over the years has to some extent made that a quite powerful argument. A strong case can be made that these coastal villages are more suitable for retirement domiciles and holiday cottages than family homes.

Feelings run high amongst some older North Norfolk people who resent very strongly the influx of wealthy individuals that have bought properties in their towns and villages since the 1970s. They have seen their local amenities disappear; old barns being converted into luxury homes and useful local shops closing to make way for gift shops, art galleries and estate agencies. The local estate agents in the prime areas are viewed as profiteers that deliberately inflated house prices during the boom years to maximise their profits. That may or may not be true – fashion is all and will drive prices upwards; this made Cornwall too expensive for some and caused them to look to the east. When B-list celebrities started to buy properties in and around the Burnham Market area the word was soon spread through articles in the broadsheets. These proclaimed how wonderful the area is and how cheap were the properties compared with other desirable parts of the UK. The term “green wellie brigade” was coined and cut-glass accents became commonplace in coastal public houses and retail outlets. BMWs, Audis and Range Rovers appeared in driveways and on forecourts of the local pubs and restaurants.

Is all this really a problem? Is North Norfolk a worse or a better place due to the changes that have taken place since the 1960s?

Nothing stays the same and you cannot stop change, but should more be done to address the problems that this property boom has created?

What do you think?

Merry Christmas and a peaceful 2020