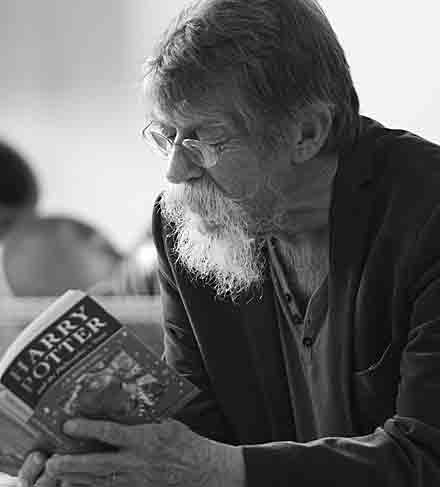 John Hurt reading to the children at The Belfry School Overstrand

It was announced on the BBC this morning that the distinguished actor John Hurt, who lives at East Runton, is to be recognised in the New Year Honours List.  He is to become Sir John Vincent Hurt CBE.

Who can forget the moment in the film  Alien when the creature erupts through John Hurt’s character’s chest – a scene now recognised as one of the most memorable in the history of cinema. He also famously starred as John Merrick – The Elephant Man; as Winston Smith in Orwell’s Nineteen Eighty Four and Quentin Crisp in The Naked Civil Servant. He is best known with younger fans for his role as Mr Ollivander in the Harry Potter films. He also took a major part in Tinker, Tailor, Soldier, Spy, the very well received adaptation of the John Le Carre novel.

Many people that are not familiar with the actor’s film and stage work will have heard his beautiful voice on numerous occasions. He is in great demand for voice-overs on TV adverts and documentaries. His voice has also featured in several animated films including Watership Down.

After numerous professional awards and nominations during a career in film and stage spanning some 50 years this honour is well deserved.