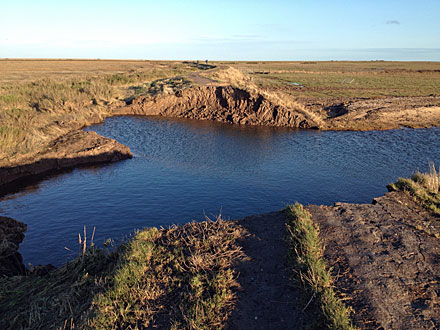 Damage to the flood bank between Cley and Blakeney

Are we going to give in?

After the December storms and the resulting North Sea surge the severe damage to the North Norfolk coastal sea defences is plain for all to see. The sea walls, groynes and shingle banks were not the only casualties, as some unfortunate individuals actually lost their homes. Thank God no one lost their life on this occasion, as many sadly did in 1953.

The Norfolk Wildlife Trust, the National Trust and the RSPB also had damage to wildlife habitats and the visitor infrastructure they had in place on their reserves.

The photograph above illustrates the scale of the damage, giving you an idea of the work required. That gap could easily contain a four-bedroom house; it is one of several such breaches in that section of the bank.

More than ten years ago the relevant authorities started to talk about managed retreat. That meant allowing some of the sea defences (other than those protecting towns) put in place after the 1953 inundation to deteriorate without any remedial work being undertaken. This particularly applied to the shingle bank at Salthouse, which has protected the houses along the coast road for many years. Likewise at Cley where the course of the River Glaven was diverted across the marsh and new sluices were installed to control the water flow.

I remember speaking to a member of staff of the Environment Agency at the time. He informed me that the days of the shingle bank defences were over and that the re-routing of the river would alleviate the problem at Cley. Basically, nature was to be allowed to take its course. In other words the drawbridge was to be lowered and the sea invited in to reclaim the land north of the coast road. Such a policy is fine of course if you don’t happen to own a house that would be inundated if we have a repeat of 1953.

The recent storm has again raised the question of what the policy should be in relation to repair work.  The Environment Agency spokesman Paul Leinster has already stated that he is seriously considering allowing the freshwater habitats north of the coast road to be returned to salt water lagoons. That move would be permanent and irreversible.

That would obviously have huge implications for the Norfolk Wildlife Trust, as the reserve at Cley would be affected the most. The recent acquisition of the land east of the present reserve by the Trust could prove to have been a waste of money; most of which was raised by public donation.

The thousands of birders that visit the reserve at Cley and Blakeney Point every year support the economy of this part of North Norfolk. Without the freshwater areas on the Cley reserve the variety of birds visiting to breed and living there will change. Many would argue that the reserve would lose its appeal and would eventually be run down. This of course makes nonsense of the huge sums of money recently spent on the superb NWT visitor centre at Cley. The visitor numbers would decline and the local pubs, B&B’s, hotels and shops would soon notice the difference in their takings.

A conservationist and ornithologist from Cley, Mr Richard Porter stated to the EDP: “I think leaving things and letting nature take its course, from a bird conservation point of view and for the conservation of other wildlife, would not be very sensible.”

The view of the RSPB spokesman was more in favour of the managed retreat solution: “The storms have had damaging effects for local people, wildlife and nature reserves along the Norfolk and Suffolk coastline. Sadly, as climate change predicts sea levels to rise, these types of events will become much more severe in future years.

“We need to plan to minimise these impacts, but there also lies an opportunity to work with natural processes to create sustainable defences and new wildlife habitats.

“Where freshwater habitats may be lost to future storm surge events, the RSPB, along with others, is stepping up its efforts to create new freshwater nature reserves inland to ensure the wildlife dependent on habitats like these is not lost forever.”

That is all well and good of course but aren’t we forgetting something here? This stretch of coast and its wildlife habitats are precious and are surely worth protecting? The future, as is the past, is another country. Who knows what things will be like along the coast in 50 or 100 years time? We are living today and I and thousands like me enjoy what we have and do not want to let the sea back in, something now being proposed under the guise of being some noble conservationist gesture.

When it comes down to it this is primarily about money and it is not yet clear that the money is going to be forthcoming from the Environment Agency; however, we do have a legal obligation under EU rules to protect these areas: see report by Professor Alastair Grant of the University of East Anglia Centre for Ecology, Evolution and Conservation – Restoration and Creation of Saltmarshes and Other Intertidal Habitats.

The rules require that they (saltmarshes and mudflats and a number of other natural habitats) “should be maintained in favourable conservation status or restored to this if they have deteriorated.”

A report is being awaited by the authorities that will give recommendations about what is to be done. I will await that with interest but I am beginning to fear the worst.

Below are some links that will take you to further information and other local opinions on this matter.