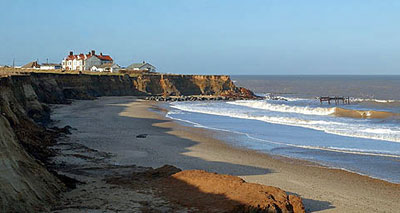 Remains have been discovered beneath the beach at Happisburgh in North Norfolk indicating that cannibalistic humans may well have lived there over one million years ago.

Scientists have investigated stone tools and fossilised remains that are believed to be the oldest such artefacts ever found in the UK.

The likely settlers were Homo erectus and Homo antecessor our ancient ancestors. It is thought they had small brains and may possibly have had cannibalistic tendencies.

Chris Stringer of the Natural History Museum stated: “We don’t know which species of early human first came to Britain so my dream is to find a fossil human at Happisburgh.”

He went on to tell the Sunday Times: “Happisburgh could be the first place where humans settled in Britain… We have some spectacular finds of tools and the fossils of butchered animals beneath cliffs in front of what is now partly a holiday caravan park. We think the site where they lived was on the River Thames, which flowed out into the North Sea at that point.”

It is amazing to think that the  River Thames flowed into the sea at Happisburgh all those years ago, when what is now Norfolk was still joined to the Continent.

The proposed England Coast Path – have your say