Gallery Plus is a contemporary business in Wells-Next-The-Sea owned and run by the young husband and wife team Trevor and Joanna Woods.  The gallery shows a wide range of work but concentrates on more contemporary styles.  There are also cards, prints and jewellery for sale.

Trevor Woods entered the world at Maidstone, Kent, in 1974. His family decided to move to Norfolk in 1977 where he has lived ever since. Being very interested in design work and painting he started to work seriously in his spare time in 2001. He was soon selling his work locally and quickly built up a following amongst local art buyers.

As Trevor’s work developed it became more and more distinctive in style. He specialises in taking what he sees in everyday life and breaks a scene down into basic shapes and bold colours.

In 2004 he decided to take the plunge and became a full-time freelance artist.

Trevor’s works are in acrylic and ink. His striking graphic style has many admirers and he has received much acclaim, winning commissions and making sales to private collectors in the UK and abroad.

As he works Trevor removes the everyday clutter from the scene he is depicting creating a strong graphic representation that is instantly recognisable.

This fresh approach draws viewers to the flat colours, clean lines and dark shadows that create the image. It can be said about Trevor’s work that what he leaves out is as important as what he includes. 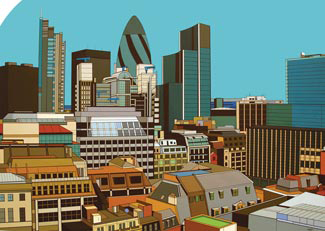 Most of the paintings are of North Norfolk but every now and again the artist heads for London and other cities to create stunning cityscapes.

The gallery is located at Warham Road, Wells-Next-The-Sea, Norfolk.  For your Satnav: NR23 1QA.

The Gallery Plus website is excellent and gives details of upcoming exhibitions and full details of opening times.

2 Responses to Gallery Plus – Wells-Next-The-Sea