Growing up as a Cromer Crab

“These Are The Days Of Our Lives”

OED – Nostalgia: a sentimental longing or wistful affection for a period in the past

I wonder what Roger Taylor was thinking about when he penned the lyrics for Queen’s hit song These Are The Days Of Our Lives. The words proved sadly prophetic for the great Freddie Mercury who died that same year.

So, nostalgia, is it a bad thing or simply harmless reflection? Surely many older individuals who had particularly happy periods in life feel nostalgic now and again. Such reminiscing wasn’t always regarded as healthy, with some doctors regarding dwelling too much on the past as being tantamount to a mental illness. Before such illnesses were better understood many in the medical world thought that nostalgia could lead to a sufferer physically wasting away and being rendered incapable of coping with everyday life. Apparently, soldiers and emigrants were considered to be at the highest risk of nostalgia-induced illness. At the moment I don’t believe that my nostalgia is pushing me to the brink of some mental collapse – still you never know! Anyway, I am prepared to risk it and relate my story about what it was like growing up in Cromer in the 1950’s and 60’s.

What prompted me to write this piece?

I was recently talking to a friend about my childhood spent in Cromer during the fifties and early sixties, a particularly happy time for me. We started to reminisce, and the memories came flooding back – school days, play, adventures and teenage romance.

The Hobart family moved to Cromer when I was eight years old. My father had managed Rusts’ grocery shop at Swaffham and the move to Cromer, Rusts’ headquarters, was a promotion for him. The firm was well established with shops in several Norfolk towns. Each branch of the business had its own premises with a specialist manager. In Cromer, there were Rusts’ shops selling wines and spirits, clothing, drapery and haberdashery, shoes and sweets, as well as groceries.

We moved into Warwick House, an apartment above the shop; it was too grand to be called a flat. I remember an ornate mahogany staircase with a full-length mirror fitted into the wall on the first landing. The rooms were huge; bay windows with a central door allowed access to balconies. The bell-pulls, to summon servants from the kitchen, were still in situ in the rooms.

Although ignorant of it then, I was living in a building constructed during Cromer’s golden age of Victorian and Edwardian elegance, the Belle Époque. Wealthy members of the aristocracy favoured Cromer, and grand hotels were built to cater for them. Sadly, the resort never recovered its fashionable status after the Great War. The ritzy hotels were still there, but the clientele had changed. The rich were now taking their holidays abroad, and with the advent of the package holiday industry, they were soon followed by the less well off. That said, the town was still extremely hectic during the summer months of the fifties and sixties – as it is today – and my father worked extremely long hours.

Whenever the opportunity presented itself, I would go down to help in the shop after closing time, assisting by fetching and carrying to re-stock the shelves. Father often spent Sundays redesigning his window displays, in which he took great pride. A particular effort was made at Christmas time: the well-lit windows were full of tempting seasonal fare.

Food packaging as we know it today did not exist. Butter was delivered in large blocks and was worked with wooden butter ‘pats’ on a slab of marble. That was a skilled job because accurately judging the weight was tricky. Cheese arrived in heavy, barrel-shaped pieces, wrapped in a thick bandage type material that had to be opened with a knife. That covering was then ripped from the cheese before the block could be cut into smaller, more manageable pieces. These large cheeses were difficult to carry; a grown man’s arms wouldn’t reach all the way around. Loose tea was delivered in wooden chests that had markings stamped on the outside identifying the contents and the exotic places of origin. I also remember the delights contained within numerous biscuit tins kept under the mahogany counters. There were shelled nuts of all kinds and desiccated coconut – something I developed a taste for.

My education was continued at Cromer Primary School (now residential units), where an open coal fire was used to heat the classroom. I can remember bringing in crates of milk to stand in front of the fire to thaw out. The milk was full cream, and we were supervised as we forced it down.

I don’t think I made much of an impression on the teaching staff, or indeed, them on me, as I can remember very little about my time there. The high point, as far as I was concerned, was when a male classmate brought a dead mole to school, which he kept in an ‘Oxo’ tin in his desk. He allowed me a peek at the unfortunate creature. The smell of the decaying mole gradually worsened, and the teacher’s nose eventually led her to the area in which he sat. She, understandably, became very agitated upon opening the tin. The offender was ordered to remove the corpse from her classroom – immediately!

When I arrived in Cromer, only one railway station remained – Cromer Beach. The High Station, once used by the Royal train on a regular basis, was closed by then and falling into disrepair. Cromer Beach station had two platforms, and a turntable that was close to Central Road. You could watch from there as a steam engine was turned around on the table by the muscle power of only two men.

A slope from the station entrance led to the main street into the town. The grass bank against the slope had large whitewashed stones arranged on it to spell out Cromer Beach. I  remember the train passengers walking down that slope; during the summer season, many were family groups arriving for their annual holiday.

In retrospect, our greatest asset in those days was freedom. Changing times have suppressed this for children, and worried parents are now reticent to let them play unsupervised. That makes the great adventures that we embarked upon impossible now. 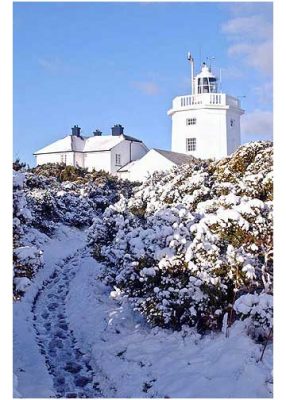 We spent much of our free time on the Lighthouse Hills to the east of the town. The hills and woods provided a play area: there were the   cliffs and trees to climb, a flat area for ball games, expansive areas of bracken in which to hide and build dens, and woodland to explore. In early summer, the heady scent of bluebells and gorse flowers would fill the air. There were blackberries to pick in autumn and during the winter snows, blood-curdling sledge runs down the steep sides of the natural amphitheatre that was Happy Valley. When we became teenagers the Lighthouse Hills became significant for another reason; many a romance blossomed there, and it was a favourite place for assignations.

We also spent time at the bottom of the Gangway where the crab boats were parked, and the catch unloaded when they returned from sea. The famous Cromer crabs were packed into wicker crans (round baskets) to go to the merchants. Sometimes a kindly fisherman would give you a crab to take home for tea.

Saturday was an important day of the week for us, and we made for two venues, the Regal Cinema and the Rollerdrome. For a small sum, you could hire some roller skates from Mr Troller, the proprietor of the Rollerdrome (the site is now a supermarket car park). Relay races generated great excitement and a lot of noise from the supporters of the teams. An event that was officially frowned upon involved skaters holding each other around the waist, forming a human chain. As the speed of this line of skaters increased the turns became more exciting and hazardous for those on the end of the chain. Their hold was broken by the whip effect, and they would be catapulted at high-speed across the rink.

The Regal provided the afternoon entertainment. That consisted of a cartoon, a serial, and a feature film. The feature was usually a cowboy adventure, which would be greeted by the audience with cheers for the good guys and booing for the bad. The strongest level of verbal abuse was reserved for any male character that approached a female member of the cast with romantic intentions. It is astonishing how vocal several dozen children could become when something went wrong with the projection equipment – an event not at all unusual in those days.

Our evening meal was sometimes fish and chips from the little shop in Corner Street (now the much larger Mary Jane’s). The proprietor, Mrs Quercia, would scoop them onto a piece of greaseproof paper and wrap them in newspaper; her hands becoming blackened by the ink as she served. That did not taint the flavour of the chips, and it had no adverse effect on our health.

To any reader who knew Cromer in those days and can remember being woken up by the lifeboat maroons exploding over the church; the inferno when the covered tennis courts at the Newhaven Court Hotel burnt down in 1961, Cilla Black appearing at the Rollerdrome, the waiters’ race, singing hymns with the C.S.S.M on the beach and standing in the rain waiting for the lifeboat to return from a rescue, I send greetings. I hope your memories of that time are also happy ones.

Finally, a few names: Mario Keeler, Richard Grey, Melvin Barker, Alan Amis, John Love, Richard Bratton, David Simons, Susan Thompson, Carol Green, Timmy Hunt, Jimmy Guyton, Lorna Fish, Ted Mann, Roger Bumfrey and the lovely Yvonne Roberts. Mr David Butt, a very good English teacher, and my maths teacher Mr Harold Hemms who was far too good for Cromer Secondary Modern. He tried his best to get my head around algebra and trigonometry but sadly failed. He did, however, succeed in sparking my interest in photography – something that has never left me.

Well that’s out of my system, and my trip down memory lane doesn’t seem to have had any adverse effects.

I will leave the last words to Queen:

“These are the days of our lives
They’ve flown in the swiftness of time
These days are all gone now but some things remain
When I look and I find, no change”

Listen! Do you want to know a secret?