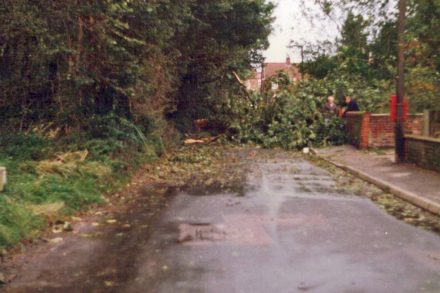 I have received the press release below from the National Trust.

In the early hours of the morning on 16 October 1987, hurricane force winds devastated homes, woods and gardens in its path. The worst storm to hit the UK in 300 years, the highest wind gusts of 122mph were recorded at Gorleston in Norfolk.

For the National Trust at Blickling Estate, it meant the loss of hundreds of trees. Gardeners who witnessed the devastation first-hand found it hard to bear, as they awoke to a scene of devastation on an unprecedented scale.

For Stephen Hagon, who is now Assistant Head Gardener on the Blickling Estate, it would be a morning he would never forget.

“That morning I was woken by a phone call from the Head Gardener, rather than the sounds of my alarm clock. I’d remarkably slept through the storm that had battered on outside and mine was one of 250,000 homes in the region without power that morning. As you can imagine, I got up and looked outside and couldn’t quite believe my eyes, as a piece of corrugated iron from next doors shed flew past the window!”

Stephen, who has been a gardener at Blickling for 45 years, didn’t make it into Blickling until lunchtime that day and the scene that faced him was heart breaking.

The then Home Secretary, Douglas Hurd, called it the “worst, most widespread night of disaster” since the Blitz. Whilst most of England and Wales experienced wet and windy weather that night, it was southern and eastern parts of England that were the worst hit.

In total a staggering 265 trees were brought down on the Blickling Estate.

Stephen’s is a tale of loss; “As we walked around the estate, it didn’t take long to grasp the scale of the damage and scene of devastation. It was heart breaking, for many of the old boys, they were almost in tears to see the woodland they’d cared for now destroyed.”

In total an estimated 15 million trees were lost around the country, with 600,000 cubic metres of woodland wiped out in Norfolk and Suffolk. And six of the seven oak trees after which the town of Sevenoaks in Kent is named, were blown down.

The hard work then began

A team of eight National Trust gardeners and contractors then had the difficult task of clearing up the damage. As they headed into winter and with heavy machinery to move the trees, it was a cold and muddy job that took two years to complete. With large areas closed off to visitors and a skeleton team of two left to maintain the herbaceous borders it was a challenging time.

Today, you can walk along the avenues of trees that now stand 50 feet tall and you’d be none the wiser that they were planted to replace the trees that were lost. Stephen knows of course.

As well as clearing up the fallen trees, re-seeding areas of grass, re-planting low lying vegetation and spring bulbs, the team went about re-planting the trees in the same positions that they had fallen, using the opportunity to fill in gaps where other trees had been lost over the years.

In total 365 trees were planted, one for each day of the year.

Nature remains a priority for the conservation charity and the National Trust continues to care for landscapes and manage them for people to enjoy too. Thirty years on, the determination of people and nature to not only survive but adapt and thrive after the storm endures.”