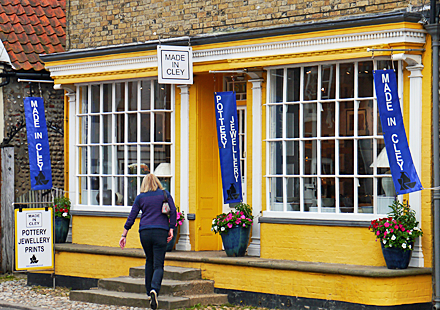 I have been a regular visitor to Made in Cley since it was created way back in 1984.  Being fortunate enough to work in the area I watched as the fledgling business developed over the years and became the success that it rightfully is today.

At present there are nine resident craftspeople producing functional stoneware, sculptural ceramics, contemporary jewellery, photographic prints, decorative tiles and garden pots.  When you visit you may well meet the two feline assistants that like to make themselves comfortable amongst the displays.

The interior of the gallery has been preserved to reflect its previous use as the village stores.  When you enter glance down at the beautiful wooden floor that has seen a great deal of traffic over many years.

The pottery is situated in the main street of Cley-next-the-Sea (the A149 coast road).  As the street is very busy during the summer season I suggest that you park at the village hall at The Fairstead (NR25 7RJ) and walk down into the village (approx 150 yards).

Made in Cley is at High Street, Cley-next-the-Sea, Near Holt. For your Satnav: NR25 7RF

Made in Cley is located in Starr House (mid 19th Century), an attractive building that was originally one of the village public houses until it was converted into a shop in 1865.

This building has an interesting history that was recalled in a book published in 1979.    Titled A Village Shop, it was  written by the shopkeeper, Freda Starr, and was published by Anglia Television.  The publication was an adjunct to the very popular Bygones TV programme that ran from 1967 until 1987.  The avuncular Norfolk farmer and broadcaster Dick Joice, who wrote an excellent foreword to the book, hosted the programme.

The book not only relates to the shop itself but also gives a fascinating insight into life in Cley from about 1906, when Freda’s family first arrived in the village. She was just two years of age. Her father then ran Starr House as the village shop until Freda and her sister took over in 1941 after both their parents had died.

The shop was flooded – as was most of Cley – in the 1953 flood.  Freda Starr related the events of that night in the book: “When we realised how serious it had become, and saw from the showroom window the enormous waves tearing by, we climbed on the drapery counter, which was the highest, taking eight large biscuit tins with us, on which to stand if the water rose above the counter, which it soon did.”