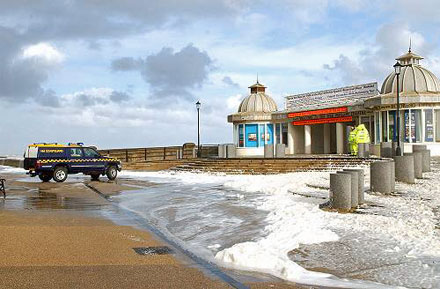 Coastguards on flood watch at Cromer

A reminder of how vulnerable our North Norfolk coastline is to flooding was received from Mother Nature yesterday.  Gale force winds and heavy rain lashed the coast all day and the wind has not abated very much today (Friday).

The sea was whipped into a very angry state by the gale and the receding tide was held back to some extent by the force of the wind. Fortunately the wind was more northerly than nor-westerly so the likelihood of really serious coastal flooding was avoided.

Local flood wardens and some members of the emergency services attended at Walcott, where before the predicted high tide time of 10.35 a.m. some 30 residents were evacuated from their homes as a precaution. The residents, plus some of their pets, spent the morning in the Lighthouse Inn until the emergency was over.

At the height of the tide the waves crashed onto the coast road forcing its closure.  This caused some inconvenience for motorists who were forced to make a diversion.

North Norfolk District Council’s civil contingencies manager, Mr Richard Cook, expressed his pleasure at how well the evacuation had gone. He said: “It is all about pre-warning. I would much rather people were sitting in the pub and they were happy.”

It was also decided to close the flood prevention gates at Mundesley and Bacton as a precaution.

The high winds and heavy rain also caused damage and problems for travellers in other parts of Norfolk. Officials were also monitoring the situation in the coastal areas of Suffolk.

The Met Office is forecasting that the wind will swing more westerly and the intensity of the gale will decrease overnight.