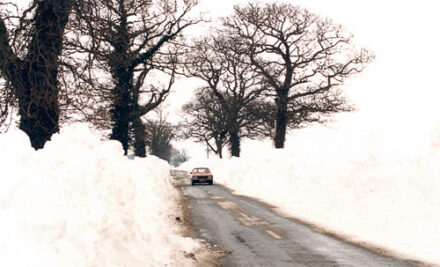 A North Norfolk Road during the ‘big freeze’.

For many people of my generation, 1962 will be memorable for the ‘big freeze’; however, it was quite a trying year in other ways.

I was still at school in 1962 and can remember the anxiety caused by the Cuban Missile Crisis that brought the USSR and the US to the brink of nuclear war. In October, that political crisis was resolved to everyone’s relief, only to be followed by the severe winter freeze that started to show its face in December that year. It snowed and it snowed and it snowed! In fact, it seemed to be snowing all the time. The sea at Cromer froze in the shallows and snowdrifts as high as 20 feet blocked the country roads of North Norfolk. The blizzards eventually eased; however, the temperature didn’t climb above freezing until March 1963.

I was prompted to write about those events that took place so long ago after hearing the writer Juliet Nicolson speaking on the radio about her book Frostquake: the frozen winter of 1962 and how Britain emerged a different country. Her account of how the events of the early sixties led to such profound changes for us all was informative and fascinating.

The ‘swinging sixties’ were beginning, and the old-guard, epitomised by the old-Etonian prime minister, Harold Macmillan, was losing its grip. A political scandal involving the Secretary of State for War Jack Profumo didn’t help. He had an affair with the 19-year old model Christine Keeler (something he initially denied in the House of Commons), who also happened to be sleeping with Yevgeny Ivanov, a Soviet naval attaché. That situation created a severe security risk and Profumo had to resign. The affair’s political fallout was partly responsible for the Conservative government’s election defeat in 1964 when Labour’s Harold Wilson became prime minister.

By the early sixties, young people regarded the political establishment as discredited. They wanted change, and it was indeed coming. Fed up with the racism prevalent in society and the same old ways of running the country that favoured the well-heeled, the youngsters started to create social change through their music, fashion and modern attitudes to life. The contraceptive pill was approved for use in 1961 (initially on prescription only to married women), liberating young women from the fear of pregnancy. The so called ‘sexual revolution’ had begun. The Beatles then arrived on the scene and the phenomena that became known as Beatlemania started to spread around the world. Mini-skirts, Carnaby Street, the Mini car, mods and rockers and, of course, the wonderful Twiggy all played their part in changing the country’s culture and the attitudes of the people.

With the youngest president ever in the White House, things were changing throughout the developed world. Of course, not all for the better, but the seismic changes in society in the ’60s would morph and develop to directly influence how we lived our lives in the decades that followed.

If you are old enough to remember the big freeze or were a raver, mod or rocker in the ’60s, perhaps you would like to share some of your memories.

Keen amateur photographer? Make some money from your hobby.