Listen! Do you want to know a secret? The Aftermath! Flood Damage At Cromer 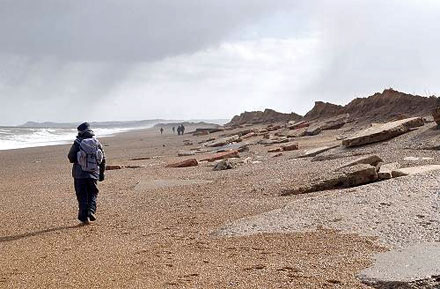 The beach at Cley-next-the-Sea showing the scouring effect of the heavy sea.

A walker taking a stroll on the beach between Mundesley and Bacton to inspect the damage caused by the recent storms has discovered what appears to be an unexploded artillery shell on the beach.

The police who are awaiting the arrival of a bomb disposal team to identify and deal with the object have cordoned off the site.

The finder, Mr Gale, found the device yesterday (Sunday) and had the forethought to take a photograph. After showing it to a friend it was decided to notify the police.

A picture of the shell can be seen on the North Norfolk News website.

WARNING! Be aware when walking on beaches where the surface has been scoured away by the recent heavy seas that Second World War mines previously covered may now be exposed. This particularly applies to the clay bed at Cley and Salthouse beaches.

UPDATE 9/1/2014 – This was eventually identified as being harmless scrap metal.