Before the outbreak of war in 1914, the coastal area of the county favoured by the affluent and the social elite, was further south than the present popular locations that lie between Hunstanton and Cromer. Centred on the Cromer and Overstrand area, it extended along the coast towards Great Yarmouth.

The area’s desirability was generated by the writings of a journalist called Clement Scott. In 1883 his romanticised descriptions of ‘Poppyland’ – a name he coined for the area – appeared in the Telegraph. When accessibility was improved with the coming of the railway, demand increased even more; in 1908 the rail journey time between London and Cromer was just under three hours.

Unfortunately the tourist boom did not last and the post-war years brought great change. The rich and famous did not return to patronise the grand hotels and the area went into a gradual economic decline. The anticipated development – as an upmarket holiday area – of the coast south of Overstrand, did not materialise. Working class families were the new customers, seeking seaside holidays with less expensive accommodation.

Prompted by my lack of knowledge of its history and topography, I decided that I would set out and investigate this quieter, less developed part of the coast. Over last summer (2003) I did just that, exploring the coastline between Bacton and Horsey. I discovered a working environment relying chiefly on agriculture. The seasonal visitor is catered for, but in a restrained way. The effect on the local economy caused by the holiday industry is less obvious than further north. The species ‘BMW’ is less frequently spotted and pretty brick and flint cottages – so popular as North Norfolk holiday cottages – are few and far between.

As you travel south around the coastline you notice that the cliffs gradually diminish in stature, becoming dunes. The sand is bound together by the roots of marram grass. These marram hills provide protection for the low-lying land, and the village communities, from inundation by the sea. The beaches and marram hills are not crowded in the summer, and become wonderful windswept havens of solitude in the winter. This piece of coast possesses some of the finest bathing beaches in Norfolk; there is clean sand in abundance to keep the children busy.

Extensive sea walls and breakwaters supplement the natural defences and have recently been reinforced by reefs of Norwegian stone, placed at enormous cost, off the beach at Sea Palling and Waxham. This expenditure was prompted by concern that due to the predicted sea level rise, all of this land – which forms a natural gateway to Broadland – will be under increased threat from a North Sea surge, last experienced in the floods of January 1953. Flooding has affected settlements here for centuries; the village of Eccles was destroyed during such an event. Writings from the religious communities that existed in the area over a period of several hundred years, reveal the great hardship and damage caused by regular coastal flooding.

This landscape has also undergone change due to constant coastal erosion. Thousands of acres of land have been lost, and many structures that were erected at what was thought to be a safe distance from the eroding cliffs and beaches, are now at risk.

The village of Bacton was once a major maritime centre peaking in importance during the 17th century. Today’s bounty comes from beneath the seabed in the form of natural gas. The industrial complex of the Gas Terminal dominates the village. Erected during 1968/69 it has developed steadily over the years, most recently with the addition of the Interconnector. This underwater pipeline allows gas to be exported and imported to and from the Continent. The presence of the site has not deterred the faithful holidaymakers, many returning to Bacton year after year to stay in the caravans or chalets on the edge of the beach.

Just off the main road – through the village towards Walcott – are the remains of the once substantial Bromholm Priory. This was founded in 1113 as a satellite of Castle Acre. It became famous in its own right during the 13th century when the monks claimed to have a piece of the Cross on which Christ was crucified. This relic was said to have healing powers. Naturally this increased the number of pilgrims and consequently the income.

I walked down to Bacton beach on a beautiful still morning, passing en route the highly original façade of the gift shop. Turning to the east I headed towards Walcott, a village best known for the piece of road that runs for several hundred yards along the sea wall. It is possible – if you can find a space in summer – to park and look out to sea. Fish and chips and ice cream are available nearby. 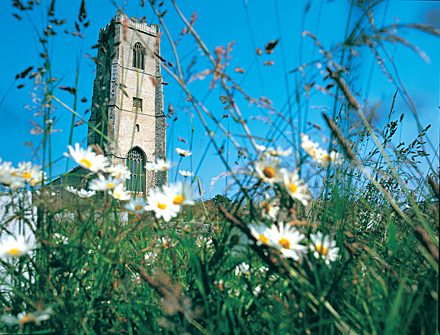 From Walcott can be seen the imposing tower of Happisburgh Church, jutting from the landscape. It occupies an imposing position on the cliff top only a short distance from the sea; the oldest buildings of the village are grouped around it on three sides. Approaching the church on foot, the height of the tower (110 feet), plus the elevation of the ground on which it stands – and the close proximity of the beach – creates a sight unique in Norfolk. It has been said to me that this place has an emotive atmosphere. It does have a melancholy feel even when the sun is shining, but a visit in winter when the breakers are crashing onto the beach, can be an affecting experience. A reminder of the unremitting cruelty of the sea is all around, recorded on gravestones and memorials. Many young men lie here, taken in their prime by the sea. Treacherous sands off this part of the coast have exacted a heavy toll on mariners over the years.

On the 16th March 1801, HMS Invincible was wrecked on the sands with the loss of some four hundred lives. One hundred and nineteen of the ship’s company lie buried in the churchyard; in 1998 a memorial stone was laid over the grave. Nearby, a gravestone records the drowning in 1899, of a 28 year old Master Mariner from Barton-on-Humber. Another – erected by public subscription – refers to the loss of the barque ‘Young England’ in 1875, with six lives lost. During the last war the bodies of three members of the Merchant Navy were taken from the sea at Happisburgh, and interred here.

In 1789 70 ships and 600 men were lost off this coast. This disaster led directly to the building of two lighthouses at Happisburgh, one on the cliff top (demolished in 1883) and a taller building further inland. This is the red and white-banded landmark that remains today. Trinity House transferred the ownership of the building to the Happisburgh Lighthouse Trust in 1990. Volunteers now welcome visitors during Sunday afternoons throughout the summer months. The views from the lantern room more than repay the climb; from this height the vulnerability of the land to incursions by the sea is fully revealed.

Tucked away behind the church in Happisburgh is the local hostelry, The Hill House. A plaque on the wall records the visit of Sir Arthur Conan Doyle in 1903. He is believed to have formulated the idea for a short story during his stay. The landlord’s son was in the habit of writing his name in the form of matchstick figures, this intrigued the writer and inspired the Sherlock Holmes story The Dancing Men. Conan Doyle is not the only writer to have used this area as a locale in a work; Devices and Desires by the crime novelist P.D.James, is also set on this piece of the coast.

Before the cliff edge became too close for comfort there was a somewhat eccentric tearoom on Beach Road at Happisburgh. Called the Cliff House tearoom it was demolished before it disappeared over the cliff. There was an excellent view of the lighthouse from the garden tables, and the home cooking was first class. The choice of sandwiches available was interesting, including banana and Marmite. The road beside where the tearoom once stood now ends abruptly at the cliff edge, starkly illustrating the effects of coastal erosion.

A new pay and display car park has recently been provided near the end of Beach Road. It has toilet facilities and there is easy access to the beach.

The second part of this article describes the coast between Happisburgh and Horsey.  Click here to continue.