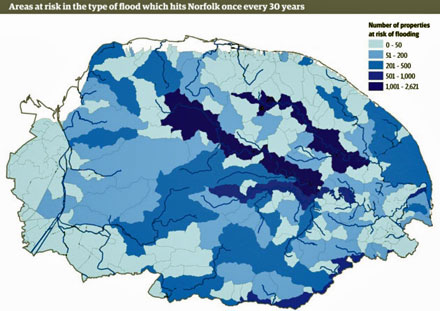 The Environment Agency has published an updated map of predicted areas of flooding in Norfolk in the event of a major coastal inundation (a predicted every 30 year event) or flooding because of exceptional rainfall over a protracted period.

Attention on possible future flooding events in the County has moved from concerns about coastal flooding  to other parts of Norfolk.

The Environment Agency’s new map has potential flood areas coloured in varying shades of blue. The darker blue the area on the map in which you live the more likely you are to suffer from flooding at some unknown point in the future. Surprisingly perhaps, some of the high-risk areas are well inland and  involve our rivers, whereas previously a possible sea incursion through the Sea Palling area into the Norfolk Broads system threatening Norwich was thought the most likely scenario.

Norfolk County councillors have been voicing concerns about the lack of dredging of Norfolk’s rivers. They were probably prompted by the situation that arose this winter on the Somerset Levels when lack of such work is thought to have made matters much worse in that area. Who is being blamed for Norfolk’s rivers not being dredged? Of course it is the cash-strapped Environment Agency.

Our County has been calculated to be the 10th most at-risk area for flooding in the entire UK by the Environment Agency. The new map indicates the number of homes it would expect to be inundated should the worst happen.

Hoveton, Wroxham, Aylsham, Coltishall, Fakenham and Norwich look as though they would suffer the most if serious flooding occurred. To try to counter that threat the Department for Environment, Food and Rural Affairs has found £24m that it is to make available to the Environment Agency and county and district councils to use to try to reduce the impact that flooding would have. A further £16m is likely to become available in 2015.

The money is to be spent mainly on coastal defences; beach management at Heacham and Hunstanton and the tidal defence scheme at Great Yarmouth. However, the county councillors are conscious that Norfolk’s inland rivers must not be neglected.

The leader of the Conservative group at Norfolk County Council, Bill Borrett, said: “I am a member of the Norfolk Rivers Internal Drainage Board and we have immense frustration with the Environment Agency for the work they are not doing on the river Wensum. All of the work the internal drainage board is doing to protect properties is being undermined by the fact the Environment Agency does not believe in dredging.”

“The river Wensum, upstream of Norwich, is the area with the most properties which are at risk of flooding in Norfolk. It’s not on the coast – it’s right in the heart of Norfolk.”

Hopefully the new money will be spent wisely and the risk of the misery that flooding brings will be reduced.